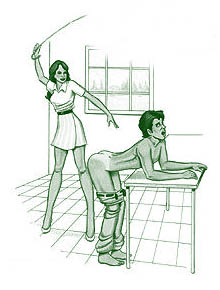 What on earth posessed you to do that

What On Earth Possessed You To Do That

A great, evocative story. You're lucky to have "found" such a loving, caring "Aunty", especially since your parents were, well if you can't say something nice about someone, you shouldn't say anything at all...

It’s a beautiful day at Girls Boarding School. Simone and Lottie are playing badminton on the lawn when they are interrupted by Headmaster Michael. Simone has forgotten her grounding but Michael is quick to remind her. He gives her a few pats on the rear with her racket on the way inside to her punishment. Click here to watch full clips

Headmaster Tom bangs on Keagan’s door to remind her what day it is – punishment day. She was supposed to be in his office at 7 am! She makes him angry when she says she overslept on this important day.Watch full movie here

Mario's Mom
I am a single divorced Mother of three boys, actually only Grant and David are my sons, Mario is my ward. He came to me when he was 14 years old. His natural parents moved to the coast and I applied for full custody of Mario.Since then he has in all respects become my son.